An honest comparison of two of the largest providers of online divorce services in the UK.

We have provided you with an honest comparison of our services vs Quickie-Divorce.com to make chosing the best provider for you, much easier.

Many people will have heard the term ‘quickie divorce’ from celebrity cases in the media.

What is a quickie divorce and is it possible to get one with the new no fault divorce law?

In this article, we’ll provide you with an honest and open comparison of our services (divorce-online.co.uk) compared with quickie-divorce.com.

Our full price is shown on the website including VAT, alongside the court fees

Not approved by Trading Standards

Use our simple online tool to find out which of our quick and easy online divorce services is right for your circumstances and budget.
Which Service Do I Need?

Trust is the most important factor when deciding which company to entrust with handling your divorce.

We feel as though it’s important to highlight the key differences between ourselves and quickie-divorce.com to help protect the name of online divorce providers.

Divorce-Online.co.uk has never been named and shamed by the national press regarding our ethics or level of service… the same cannot be said for quickie divorce.com. 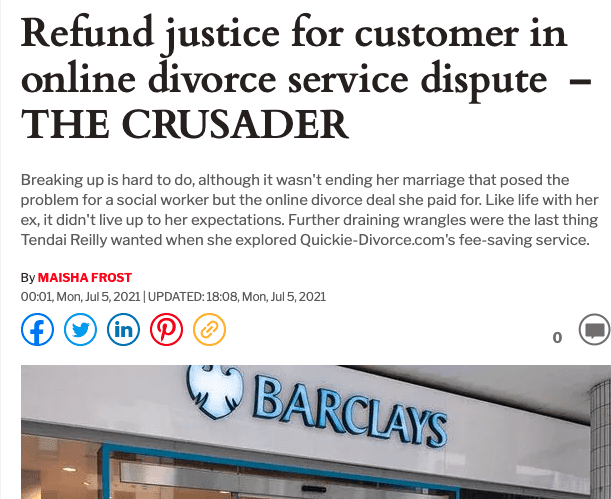 Full refunds are provided – no quibble

We are trading standards approved company

We’ve got your back – the whole way…

Our team will handle your entire divorce for you and keep you updated on the progress throughout, leaving you to carry on with your life without the unwanted stress and pain that is often caused by filing for divorce.

We ensure each client is responded to as quickly as possible, which can’t be said for Quickie-Divorce.com when reviewing their reviews on Trustpilot.

Find The Most Suitable Service For My Situation

View Our Managed Divorce ServiceOr request a callback from one of our team.

View Our Managed Divorce & Consent Order ServiceOr request a callback from one of our team.

What is a quickie divorce?

Simply put, there is no such thing as a ‘quickie divorce’. It is a word coined by the press in their use of covering celebrity divorce cases.

Many couples going through a divorce will have researched the idea of trying to obtain a ‘quickie divorce’.

Unsurprising really when they allude to getting your divorce done and dusted in a short period of time, sometimes as little as 12 weeks!

There is no possibility of a 12-week divorce in England and Wales. A more realistic timescale would be 24-28 weeks after the introduction of no fault divorce.

What are the most common myths about quickie divorce?

There are three common myths surrounding ‘quickie divorce’, which are:

How long does it take to get a straightforward divorce?

Even the simplest of cases will take between 6 and 7 months to complete due to the inbuilt cooling-off periods within the divorce procedure.

Some people believe that their divorce will be faster than others because they agree, but this usually has very little effect on the overall time it takes to be granted a divorce by the courts.

Find The Service You Need In Under 2 Minutes

Our quick and easy online divorce services can save you time, stress, and money, but which one is right for your situation? Use our simple online tool to find out in minutes.

Which Divorce Service Do I Need?

Find The Ideal Service For My Situation & Budget